Syria Daily: Dozens of Civilians Killed by US Strikes on ISIS-Held City 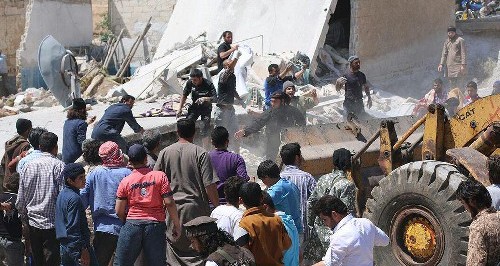 PHOTO: Aftermath of airstrike on Manbij in northern Syria, May 2015

Dozens of civilians have reportedly been killed in US airstrikes in and near the Islamic State-held city of Manbij in northern Syria.

The attacks were on Tukhar village and the Hazawneh district of Manbij, the main position for ISIS in Aleppo Province.

The Local Coordination Committees said “most” of 57 deaths in Aleppo Province on Monday were in Manbij. Updated claims on Tuesday morning, with graphic photos of the victims, say the toll has risen,

Activists documented the names of 60 civilians killed by US airstrikes on Tukhar village north of Menbijhttps://t.co/JDHGVo6MP2

US aerial operations are supporting an offensive by the Kurdish-led Syrian Democratic Forces to capture the city.

Begun in May, the assault has surrounded Manbij and SDF troops are now reportedly fighting with ISIS in some districts in the city, although progress has been slow because of snipers, mines, and the presence of civilians.

The LCC said it documented the deaths of 93 people across Syria on Monday.

Journalist Hadi al-Abdallah, seriously injured in a bombing last month in Aleppo, has issued a call for unity:

If only we could learn to put aside our differences and forget everything else and just focus on what brings us together to save our revolution….

When will we abandon banners and flags planted between us and all rally around our Revolutionary flag which we unanimously agreed on in those first months and which has become a shroud for thousands of our martyrs?

If only the leaders of our different factions realized that they are nothing without the people. The people are the revolution and they alone are capable of imposing what they want.

We should learn to respect the achievements and efforts of those who have different opinions and stop the accusations of treason.

Abdallah was wounded by an IED in an apparent assassination attempt. His friend and cameraman, Khaled al-Issa, died of his injuries.

The rebel faction Nour al-Din al-Zenki has promised punishment of a fighter who was filmed beheading a teenager who was reportedly in a pro-Assad militia.

Graphic video and pictures showed fighters posing with the boy before one of them took him to the back of a pick-up truck and executed him.

The boy, identified as Abdallah Issa fromm the Sheba district of Homs city, was reportedly with the pro-Assad, mainly-Palestinian al-Quds Brigade when he was captured.

The al-Quds Brigade is part of a pro-Assad force which attacked Handarat, north of Aleppo city, early Tuesday. The area is just to the east of the al-Castello Road, the last route to opposition-held districts of Aleppo, which was cut off by a regime advance last week.

Yasser Ibrahim Youssef, a member of Nour al-Din al-Zenki’s political bureau, said the killer will appear before an “independent judicial” and “will be referred to military justice in the event of proven involvement of committing any violations”.

In a subsequent statement, Nour al-Din al-Zinki denounced the executioner and said he has been arrested and will be punished.

The legal adviser to the Free Syrian Army, Osama Abu Zeid, said that perpetrators will be held accountable and that procedures will be established “to prevent such violations in the future”.

The deputy head of the opposition council in Aleppo says that there is only a three-month supply of food if the area is besieged by regime forces.

Pro-Assad troops, enabled by Russian airstrikes, have effectively cut off the last route into opposition-held districts. Earlier this month they established “fire control” over the al-Castello road to the north of Syria’s largest city.

The council official, Zakaria Aminu, said there are already shortage of vegetables and fuel, with a doubling of prices in the past 10 days.

He said the council is rationing food stockpiles and distributing supplies “fairly” to stores and bakeries: “We are cooperating with military factions to adjust prices and prevent the monopolization of food and fuel.”

Aminu added that the council will “hold accountable” parties that attempt to profit from the crisis.

Activists say up to 400,000 people are in the opposition neighborhoods.

The UN’s Office for the Coordination of Humanitarian Affairs earlier warned that there was enough food in Aleppo to “last 145,000 people for one month”, noting that the area last received humanitarian supplies on July 7.

The OCHA said that there was “sufficient emergency medical supplies for four to five months”.

Rebels have regained Kinsabba in Latakia Province, the fourth time the town has changed hands in three days.

Local sources say the rebels moved back into Kinsabba on Tuesday morning, inflicting significant casualties on pro-Assad forces. One report claims that 50 regime troops and militia were killed by a vehicle bomb.

A pro-regime site acknowledged that the Syrian Army and militia had withdrawn “due to their exposed positions that made their defenses vulnerable to a jihadist attack”.

Al-Masdar News said the decision followed a suicide bombing that killed several troops and forced the Syrian marines and Desert Hawks militias to pull out of nearby Qal’at Shalaf on Monday night.

The mountaintop town has been swapped back and forth six times since February, beginning with a regime victory followed last month by a successful rebel offensive.

Pro-Assad units retook Kinsabba on Saturday, but rebels hit back with a dawn raid on Sunday. Regime forces advanced again on Monday.