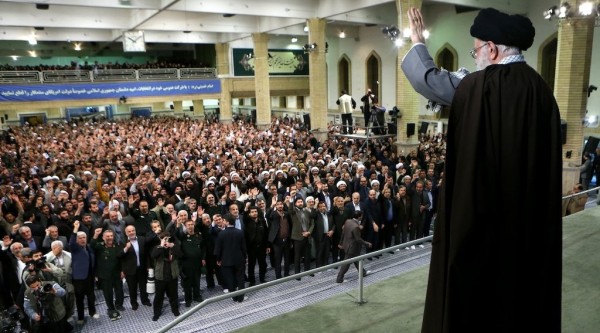 PHOTO: Supreme Leader addresses a crowd in Najafabad on Wednesday

Iran’s Supreme Leader has led a push by hardliners and conservatives for the right candidates to be elected in Friday’s elections.

Ayatollah Khamenei told an audience in central Iran on Wednesday that the US and Britain were pursuing “the enemy’s tricks” to underine the vote, but said Iranians will elect MPs who “will not be intimidated by America”.

Iranians will vote for both the 290-seat Majlis and the 88-member Assembly of Experts, which chooses the Supreme Leader. The Guardian Council has ensured that centrists and reformists cannot gain in the Assembly by disqualifying 80% of candidates, including the grandson of Iran’s founder, Ayatollah Khamenei. It has also banned more than 6,000 hopefuls, including almost all reformists and centrists, for Parliament.

Khamenei deflected criticism that the election for the Majlis had been stacked against the centrists, linked to President Rouhani and former President Hashemi Rafsanjani, and reformists through the disqualifications. He said the enemy was creating “a false dichotomy between a pro-administration and anti-administration Parliament”. Instead, the nation wanted a Parliament “unable to be deceived, whose officials oppose the avarice of the Arrogance, who are defenders of the nation’s honor and independence, and who will not be intimidated by America”.

Iranians want neither a governmental, nor an anti-governmental #Majlis; but a brave, faithful Majlis aware of its duties& not bullied by US.

However, Khamenei implicitly put down figures in the centrist-reformist bloc: “A group inside the country has been indignant because we always speak of influence, but this indignation is misplaced….The issue of influence and infiltrators is real, but sometimes individuals do not realize that they themselves have become part of this current.”

By 'hardliner' enemy means those who are more determined to realize Revolution’s objectives. To them, moderates are those who surrender.

High-level officials supported the Supreme Leader with other warnings on Wednesday. The head of the Guardian Council, Ayatollah Jannati, appeared to target former President Rafsanjani as he declared that “corrupt individuals, in coordination with foreign policies, have worked for a long time both inside and outside” Iran to infiltrate the Assembly of Experts.

Jannati assured, “Insofar as we have been able to detect infiltrators, I do not think we will have problems in the future.”

Rafsanjani had hoped to regain the chair of the Assembly, which he led from 2007 to 2011.

The judiciary’s spokesman, Gholamhossein Mohsen Ejei, added in a press conference, “The question is whether the British have a relationship with the people they are saying to vote for….The people must be smart and not be fooled.”

Officials have particularly singled out BBC Persian as an agent of sedition, saying the news outlet is subverting the elections through its coverage.

President Rouhani avoided any intervention in the debate on Wednesday, saying after a Cabinet meeting, “The Iranian nation will show the ill-natured that they do not accept libel, backbiting, being ill-natured, and divisiveness in the country. The direction that [the Iranian people] have taken for the country’s advancement will continue.”