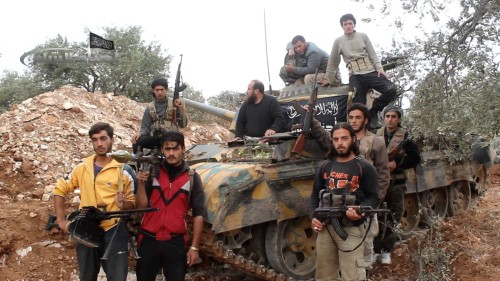 PHOTO: Rebels after capture of Sukayk village in northern Hama Province on Wednesday

Op-Ed: Talking to Assad is Necessary, But It Does Not Make Him “Respectable”
Iran Daily: Burying the Soldiers Killed in Syria

Syria’s rebels advanced on Wednesday in their counter-offensive in northern Hama Province, erasing all of the regime’s limited gains in their three weeks of attacks supported by Russian airstrikes.

The rebel coalition Jaish al-Fatah captured the village of Sukayk, which had been occupied by the Syrian military soon after the start of their assault on October 7.

Sukayk was one of the few areas claimed in the regime’s offensive — the first of six fronts launched with Russian, Iranian, and Hezbollah support this month — in a 20-km (13-mile) salient bordering rebel-held Idlib Province. With its loss, the village of Atshan is the only one that is still held by the Syrian Army.

Footage of rebels near Sukayk:

A tour of the village:

Rebels will now seek to move on regime-controlled territory in northern Hama. The next significant target may be Morek, a town on the Hama-to-Aleppo highway which was captured by the Syrian military in October 2014.

Double Blow for the Regime Offensives

The rebel gain comes soon after the Islamic State’s successes in a counter-offensive east of Aleppo. ISIS has cut the main road, running from Khanasir, for the Syrian military into the country’s largest city. They briefly fought regime forces inside the key Safira base, southeast of Aleppo, before being pushed back on Wednesday.

Activists and pro-regime outlets are warning that up to 1 million residents of regime-held sections of Aleppo may be threatened by the cutoff of the Khanasir-to-Aleppo road. The Red Crescent is trying to persuade rebels to allow food and supplies to bypass the Islamic State and reach the regime-controlled districts.

Pro-regime websites are trying to sustain hope with the claim that the Syrian military’s “Cheetah Forces” are only 3 km (2 miles) from the Kweires airbase, east of Aleppo, which has been surrounded by the Islamic State since early 2014.

The outlets have maintained for two weeks, since the start of the regime offensive on the east Aleppo front, that the relief of the airbase was imminent.

However, al-Masdar News admitted that, even as the Cheetah Forces attacked, the Islamic State captured the nearby village of Jubboul.

Russia: 71 Sorties on 118 Targets on Tuesday-Wednesday

The Russian Defense Ministry said on Wednesday that its warplanes carried out 71 sorties, attacking 118 facilities of the Islamic State, in the previous 24 hours.

However, the Ministry’s statement indicated ongoing deception over its targets, with Idlib, Damascus, and Latakia Provinces — where there are few or no Islamic State positions — listed. Major General Igor Konashenkov also said that attacks were carried out in Hama, Homs, and Aleppo Province, where five of the six Syrian military’s offensives are against rebels rather than ISIS.

Konashenkov said that Su-24 jet fighters destroyed “a militant command post with a communication hub and a large ammunition depot”, close to the regime’s frontline with rebels near the town of Salma in Latakia Province.

Meanwhile, the Russian Foreign Ministry and Maria Zakharova are upset about the news that Moscow’s attacks have killed civilians — reportedly more than 450 since September 30:

#Zakharova: We are outraged at circulation of false reports of civilians allegedly killed in #Syria as a result of #Russia’s air operation

Doctors: At Least 35 Killed and 72 Wounded in Airstrikes on Hospitals

At least 35 patients and medical staff have been killed and 72 wounded in a significant increase of air strikes on hospitals in northern Syria, according to health staff supported by Médecins Sans Frontières inside the country.

The escalation of attacks, which began in late September as Russia began bombing in support of the Syrian military, targeted 12 hospitals in Idlib, Aleppo, and Hama Provinces throughout October, including six hospitals supported by MSF.

Six hospitals were forced to close, including three supported by MSF, and four ambulances destroyed. One hospital has since reopened,but access to emergency, maternity, pediatric, and primary health care services is severely disrupted.

MSF also reports on the flight of civilians — more than 120,000, according to the UN — from airstrikes and fighting in the midst of a six-front regime-Russian offensive supported by Hezbollah and Iranian-led units.

A report by pro-opposition Orient News, subtitled in French, on a mural — produced by 30 artists in Kafranbel in northwest Syria, using more than a million tiles — documenting the history of the Syrian Revolution:

Since the start of the uprising in 2011, Kafranbel has been known for its protests including banners addressing the world in Arabic and English.

Reports: 30+ Killed in Regime Airstrikes on Douma Near Damascus

As Russia says it will prevent any UN resolution barring the use of barrel bombs, the Syrian Air Force has reportedly killed more than 30 people in morning strikes on Douma, northeast of Damascus:

The regime has bombarded Douma for years in an attempt to break civilians and rebels, including the leading faction Jaish al-Islam. Hundreds were killed in the town this summer by airstrikes.

Russia indicate on Wednesday that it will block a UN resolution seeking to ban the Assad regime’s use of barrel bombs.

France, Britain, and Spain have drafted the text and circulated it to some members of the Security Council, with the rest receiving it in the next few days.

“I think it’s important to ensure that indiscriminate bombing is stopped because it kills so many people, it terrorizes so many people and it’s one of the causes of the flood of refugees and migrants out of Syria,” said Britain’s Ambassador to the UN, Matthew Rycroft.

Russia’s Deputy Ambassador Petr Iliichev told reporters that he has not seen the draft, but he said it should not be circulated, “especially at this very delicate moment we should not jeopardize the efforts that are being undertaken in Vienna.”

Moscow’s military intervention has brought about the multi-national talks in Vienna on Friday, as Russia hopes to keep President Assad in power during a transitional period.

A February 2014 resolution adopted by the Security Council demanded that all parties in Syria stop using barrel bombs, but Russia enforced that it was not under Chapter 7 of the UN Charter and thus cannot be enforced.

The proposed European draft resolution does seek Chapter 7 authority, including the imposition of sanctions.

The regime’s barrel bombs have killed thousands of civilians since the Syrian Air Force began using them in August 2012.

Anticipating Friday’s multi-national talks in Vienna, US Secretary of State John Kerry has said, “This is the most promising opportunity for a political opening we’ve seen in years” over the Syria crisis.

Kerry pointed to US-Russian agreement as the reason for hope:

We agree that the status quo is untenable and we must find a way to end the conflict. We agree that a victory by Daesh [the Islamic State] or any other terrorist group has to be prevented. We agree that it is imperative to save…state institutions and preserve a united, secular Syria.

We agree that we must create the conditions for the return of displaced persons and refugees. We agree on the right of the Syrian people to choose their leadership through transparent, free and fair elections with a new constitution and protections for all minorities.

The Secretary of State did chide Moscow over its month-long campaign of airstrikes — which helped bring about the international discussions — saying that they were neither “smart nor moral”.

Others were not as optimistic on Wednesday. A 2senior official of one US ally in the Middle East”, said, “We want to be team players [but] I’m skeptical this will actually lead anywhere.” A “top European diplomat” said his Government is still in the dark about how the meeting and anticipated follow-on sessions will be structured.

A close call for a cameraman in Darayya, southwest of Damascus, as a bomb from a helicopter lands nearby: