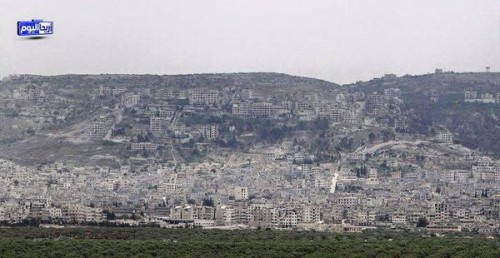 The rebel coalition Jaish al-Fatah have taken Ariha, one of the last towns held by the regime in Idlib Province in northwest Syria, within hours of declaring an offensive.

The Islamist faction Jabhat al-Nusra put out the announcement on Thursday night:

Jaish al-Fatah and journalist Hadi al-Abdallah, who has accompanied the rebel offensive across Idlib Province, later put out the news on Twitter.

Jaish al-Fatah had declared the offensive on Thursday morning, after weeks of preparation for the assault:

The opposition soon took the nearby village of Kafr Najd and regime checkpoints as they moved into northern and eastern sections of Ariha.

Claims followed that Syrian forces had withdrawn from the town.

Reports tonight indicate that the Syrian troops are in disarray as they tried to flee along the M4 highway, with Jaish al-Fatah units pursuing them. Rebels have already taken the village of Ma’taram, to which some Syrian forces had retreated.

Footage of the retreat:

Ariha has been surrounded by rebels since the opposition captured Idlib city, to the north, on March 26 and then overran two regime military camps near the main highway.

Earlier this month, the rebels occupied the high ground above the town, including Mount 40.

With the victory, rebels now hold almost all of Idlib Province and can consider advances into Aleppo and Hama Provinces to put pressure on the regime, including in the cities of Aleppo and Hama. A pro-Assad activist noted as the offensive began:

The battle for Ariha will be decisive. If the Syrian Armed Forces cannot repel this assault; this will give Nusra full control of Idlib

This evening, the same activist acknowledged the Syrian Army’s quick retreat from the supposedly-vital town:

SAA did not really try to hold the city of Ariha – seems the Central Command is no longer committed to liberating the provincial capital.

The rebel victory follows the capture of Idlib city, the provincial capital, on March 28; the city of Jisr al-Shughour on April 26; and two of the regime’s remaining military camps in the province.