Syria Daily, May 12: Assad Regime — We Have Achieved Nothing with “Reconciliation” 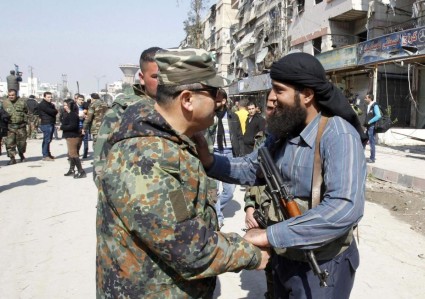 A curious — and perhaps inadvertent — admission in State media this morning, as Syrian officials say the Assad regime has accomplished little with its headline declaration of “reconciliation”….

Since early 2014, the regime has put out the idea that it is pursuing ceasefires, notably in the Damascus suburbs and in the city of Homs, to end the suffering of civilians and to move towards a political resolution of the four-year conflict. Opponents have countered that “reconciliation” is actually a “surrender or starve” strategy, with the Syrian military imposing sieges of almost three years on some areas.

On Monday, the head of the National Reconciliation Committee at the People’s Assembly, Omar Osi, complained that the group had been shut out of discussions: “The Committee represents a large section of the Syrian people, and therefore must have a presence in dialogue sessions, particularly in international conferences.”

State news agency SANA continues, “Other members said that since its inception, the Committee didn’t achieve anything and that it failed to assume its intended role, calling for…meetings with the Foreign and Expatriates Minister.”

The catalyst for the dissatisfaction appears to be the exclusion of the Committee from the latest UN initiative for discussions, the proposal by envoy Staffan de Mistura for consultations in Geneva. De Mistura’s move follows his failure, despite months of effort, to open up even the possibility of a six-week ceasefire in Aleppo, divided between the regime and rebels since July 2012.

The head of the Reconciliation Committee explained, “De Mistura met representatives of the opposition and the government’s supporters, but didn’t meet with [us].”

Rebels have launched a new offensive near Ariha, one of the few towns still held by the regime in Idlib Province.

The attacks began with a large tunnel bomb underneath the Fanar checkpoint: 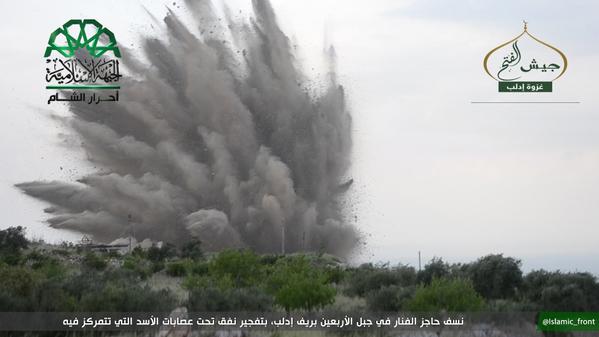 Abu Issa, the head of the rebel faction Suqour al-Issa, announced the start of an offensive to capture Ariha via a Twitter message on Tuesday.

Reliable sources report that a series of military checkpoints have already fallen.

Rebels have moved close to Ariha since last year, but the town was put under renewed pressure with the fall of Idlib city to the opposition at the end of March.

Report: More than 30 Killed in Regime Airstrike on Aleppo Roundabout

Aftermath of a regime airstrike on Tuesday on the al-Hajj Roundabout in Aleppo, with reports of more than 30 people killed as victims were trapped inside their cars:

Reports say regime artillery fired on rescuers as they tried to deal with the dead and wounded.

Rebels are claiming the capture of five villages from the Islamic State north of Aleppo.

The advances near the a-Shahbaa Dam, after almost 18 months of fighting in the area, would allow rebels to concentrate efforts in their battle with regime forces elsewhere in Aleppo Province.

Footage from the village of al-Hasia (see map):

Rebel operations in the area:

Heavy fighting is reported to the south and east of Jisr al-Shughour, the city near the Turkish border captured by rebels on April 26.

Rebels claim they killed at least 20 troops in a hit-and-run attack on the regime in Sanqarah village to the east of Jisr al-Sughour (see map). Captured ammunition and weapons, including a Konkurs anti-tank missile system:

Rebels in the village:

Pro-Assad outlets claim that Syrian forces are moving towards the city, five days after the President promised the rescue of more than 200 troops holding out in Jisr al-Shughour’s National Hospital; however, there is no confirmation of an advance.

The rebel coalition Jaish al-Fatah has declared war on the Islamic State in the Qalamoun region from the Lebanon border across Syria to the north of Damascus.

Jaish al-Fatah said it had reached the decision after consultations with scholars about the “corrupt” Islamic State.

The move follows the expulsion of the Islamic State from Quneitra Province in southwest Syria after an allied group attacked rebels.

It also comes amidst fighting between rebels and a Hezbollah-Syrian force in the region — the opposition fighters are accusing the Islamic State of attacking them as they tried to fend off regime assaults.