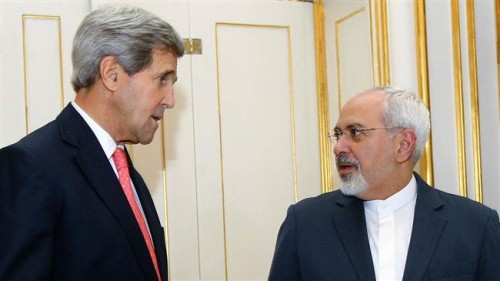 In a marked shift of tone, Iran’s lead nuclear negotiator has played down the possibility of agreement in this week’s discussions with the US and the other 5+1 Powers.

Deputy Foreign Minister Abbas Araqchi, speaking after Iran and the US opened three days of bilateral talks in Geneva, said on Thursday that the negotiations were “serious, explicit, and tense”.

Araghchi, while continuing to talk of political will to achieve a deal, said:

Reaching an agreement which is satisfying for both sides is a difficult task and we are yet far away from that point.

However, the efforts continue and it is very soon to judge the possible outcome.

The Iran-US bilateral meeting followed seven hours of discussion between Iranian Foreign Minister Mohammad Javad Zarif and US Secretary of State John Kerry on Wednesday. After the Iran-US talks, Tehran and the 5+1 Powers (US, Britain, France, Germany, China, and Russia) will convene on Sunday.

No details have been given of the discussions, with the central issue remaining Iran’s number and level of centrifuges for uranium enrichment.

However, Araqchi hinted that new proposals had been made while cautioning, “It is important to agree upon all issues. If one is left undecided, then there is no agreement at all.”

He also pointed to topics beyond centrifuges: “The [nuclear[ program itself includes different issues like the Arak heavy water reactor, enrichment, different nuclear installations, and supervision. This diversity and complexity is a cause of concern.”

He concluded that both sides are willing to reach an agreement, “however, considering the issues, it is a difficult task”.

Speaker of Parliament Ali Larijani also pointed to tension in the talks, which he called the most important for Tehran since the Iran-Iraq War of the 1980s, by denouncing the US, “Those who have not the capability to settle the issue should be aware that they cannot carry out a political fraud.”

The Foreign Ministry has denied reports that General Qassem Soleimani, the head of the elite Qods Force of the Revolutionary Guards, has been injured in Iraq.

“Major General Soleimani is in good health and the news is false,” Deputy Foreign Minister Hossein Amir-Abdollahian said on Thursday.

Claims have circulated on social media and the Israeli press this week that Soleimani, who has been prominent alongside Iraqi forces in the fight against the Islamic State, was seriously wounded in an attack by the jihadists on Samarra, 70 miles northeast of Baghdad.

Iranian-American Hekmati, Detained for 3+ Years, Appeals to Rouhani for Release

Iranian-American Amir Hekmati, held since August 2011 in Tehran’s Evin Prison, has asked Hassan Rouhani to do everything within the President’s power to secure his release.

Hekmati, a former US Marine who was seized while visiting relatives, was initially sentenced to death for espionage but is now serving a 10-year prison term. He also wrote the head of judiciary, Sadegh Larijani, and Intelligence Minister Mahmoud Alavi in December.

In the letter to Rouhani, Hekmati describes “dire” prison conditions. He describes proposals to his family from Iran for his release in exchange for Iranians held in the US, but rejects the initiatives: “I continue to maintain that I’ve committed no crime and have nothing to do with Iranian prisoners in the US [who] should be released.”

I have not lost hope that your calls for better relations with the world, including the US, will result in you taking action and putting an end to what now the longest incarceration of an American in Iran in history. I continue to hope that in the near future the hostility between the US and Iran will come to an end, brightening the future for Americans and Iranians alike.

Speaker of Parliament Ali Larijani has said that last week’s deadly attack on the French magazine Charlie Hebdo was a “false flag” by French intelligence services to tarnish Muslims.

Larijani told a crowd in Qom on Wednesday that the “intelligence services are behind such acts aimed at creating a tendency for terrorism”.

The Speaker is the highest-ranking official to allege a plot by Western services. However, the claim has been prominent in State media such as the English-language Press TV, which declared via a US “analyst” on Wednesday, “Charlie Hebdo is another false flag, which was done with the complicity of Zionist forces in the French government.”

Meanwhile, hardliners have called for action against the newspaper Mardom-e Emrouz for its Page 1 article on Tuesday featuring the remarks of actor George Clooney on the Charlie Hebdo attacks.

Clooney was pictured holding his Golden Globe award, with a “Je Suis Charlie” badge on his tuxedo, with the newspaper highlighting his comment, “Millions marched not only in Paris but all around the world, and there were Christians and Jews and Muslims, leaders of countries all over the world, they didn’t march in protest, they marched in support of the idea that we will not walk in fear. Je suis Charlie.”

Critics said the newspaper had not provided the context of the “insulting” and “disrespectful” cartoons by Charlie Hebdo, which suggested that Mardom-e Emrouz is supporting the French magazine.

About 70 lawmakers have reportedly signed a complaint against the daily, called for a harsh punishment.