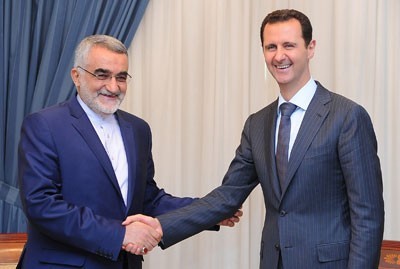 The Iranian regime celebrated the re-election of its ally, Syria’s President Assad, in a series of messages on Thursday.

In Damascus, Alaeddin Boroujerdi (pictured), the head of Parliament’s National Security Committee, told Assad, “The Syrian people’s will overpowered America’s….This is the fruit of the Syrian people’s three years of resistance.”

Boroujerdi, who led a delegation of Iranians nominally monitoring the ballot, asserted, “All impartial foreign observers described this election as free and in a calm atmosphere. The Syrian people picked (Assad) with an overwhelming (88.7%) of votes.”

Larijani told Mohammad Jihad al-Laham, “This victory will fall as desperation and frustration in the hearts of Zionists and will consolidate factors of security and stability in the region.”

The head of Iran’s military, General Hassan Firouzabadi, added that Assad’s victory was “a source of disgrace for America and opponents of the Syrian people”.

Iranian media add Syrian Prime Minister Wael al-Halqi’s call on Thursday for Tehran to help in rebuilding: “The Iranian companies are Syria’s main partners in reconstruction of our country.”

Iran’s financial, political, and military support has been essential for the Assad regime during its 39-month conflict with protesters and insurgents.

Speaking during a meeting at the Central Bank, Grand Ayatollah Nasser Makarem Shirazi has supported the Rouhani Government in both nuclear talks and economic policy, “With the arrival of the new administration, the people are hopeful the nuclear issue will be resolved and lead to economic recovery.”

White House: We Will Not Limit Iran’s Oil Exports to 1 Million Barrels Per Day

The Obama Administration has indicated that it is not trying to restrict Iran’s oil exports to 1 million barrels per day.

White House spokesman Jay Carney said on Thursday that President Obama has ordered another six-month pause in efforts to further decrease Iran’s sales, casting a positive light on adherence to an interim nuclear agreement in November:

In return for this and other limited relief measures, Iran has committed to take steps that halt and in key respects roll back progress on its nuclear programme.

The International Atomic Energy Agency has verified that Iran is complying with these commitments.

US media have repeatedly said that Washington had set a 1 million bpd cap under the interim agreement; however, there was little public sign of objection from the Administration as Tehran’s exports recovered to 1.4 million bpd this spring.

The Islamic Republic’s exports, which stood at 2.2 million bpd at the start of 2012, fell to a historic low of less than 800,000 bpd last year under the pressure of US-led sanctions.

Experts from Iran and the 5+1 Powers have concluded two days of discussions in Vienna.

No details were given of the talks, which will be followed by the 5th round of high-level negotiations on a comprehensive nuclear settlement on June 16.

Issues include the number and level of Iran’s centrifuges for uranium enrichment, the status of its nuclear facilities, “possible military dimensions” of the nuclear program, and US-led sanctions on Tehran.

Representatives from Iran and the six world powers have ended their second day of expert-level talks over Tehran’s nuclear energy program.

The details of the negotiations, which were held on Thursday in the Austrian capital, Vienna, between negotiators from Iran and the five permanent members of the United Nations Security Council – the United States, France, Britain, Russia and China – plus Germany, have not been revealed yet.

The two sides brought up and accurately discussed detailed expert-level issues during the intensive, technical talks that began on Wednesday, said Hamid Baeidinejad, director general for political and international affairs at the Iranian Foreign Ministry.

“The results of this expert session will be presented to the senior officials of the two sides,”

The head of the Assembly of Experts, which oversees the Supreme Leader, is in “very serious and concerning” condition after a heart attack on Wednesday.

Doctors said Ayatollah Mohammad Reza Mahdavi Kani, 83, was suffering from a lack of blood flow that had caused “serious damage” to his brain, making the situation “unpredictable”.

The Supreme Leader, President Hassan Rouhani, and other senior officials visited the cleric on Thursday.