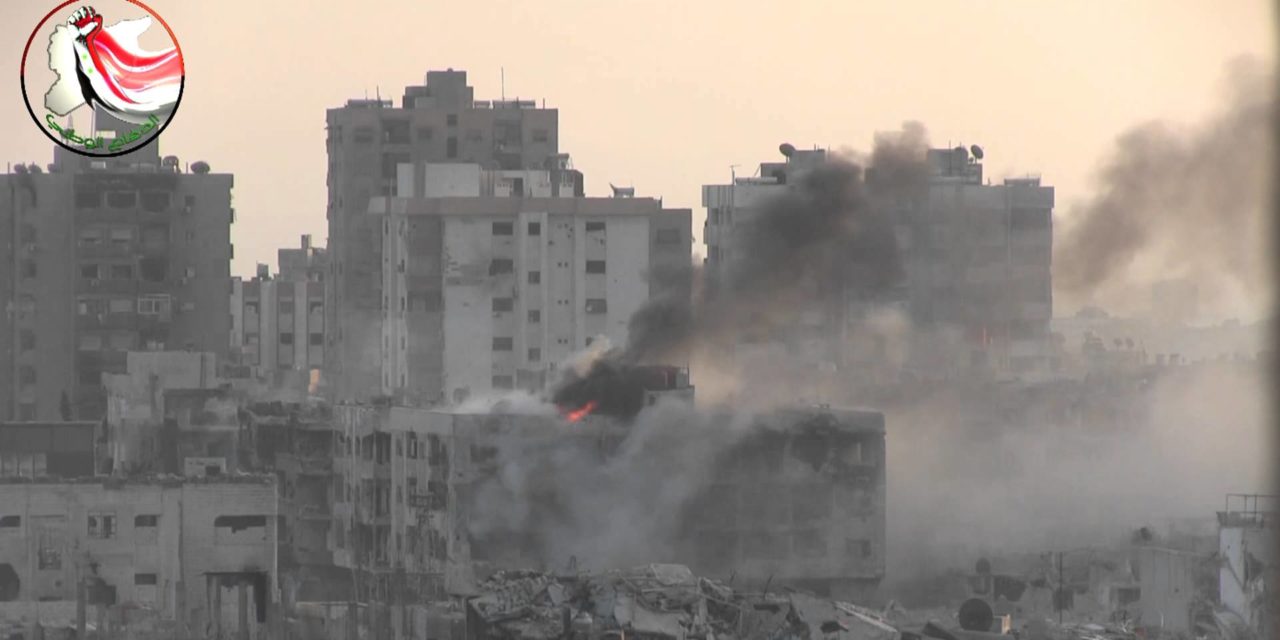 Reports are circulating that at least 31 people, inluding four regime generals, have been killed by a bomb in the Damascus suburb of Harasta.

Syrian state media are not reporting the incident. However, on Sunday afternoon, the Russian agency ITAR-TASS said, from “eyewitnesses”, that a powerful bomb exploded near the administrative offices of the Syrian army.

The eyewitnesses said the attackers managed to place explosives in underground utilities.

The Direh al-Aasmeh (Shield of Damascus) Brigade, part of the Free Syrian Army, has posted claimed footage of the blast, pointing to an underground detonation:

State news agency SANA reports, “Units of the armed forces on Sunday took full control of the factories and ginning mills area to the east of al-Nairab Airport in Aleppo.”

Insurgents have held Nairab since early this year.

With the launch of its Qalamoun attacks on Friday, the Syrian military is now fighting on three fronts in its most widespread offensive of 2013: attacking south of Damascus and near Aleppo as well in the Qalamoun mountains between Damascus and the Lebanese border to the west.

President Assad’s forces have had some success on both the Damascus and Aleppo fronts. South of the capital they have taken several towns as they try to remove the insurgent belt between Damascus and its international airport, while opening the corridor south to Daraa Province. A corridor has also been opened to Aleppo, Syria’s largest city, with the capture of as-Safira to the east.

Iran’s Press TV on the Syrian military’s advance near Aleppo:

However, it is far too soon to declare a significant, let alone decisive, regime victory. Anne Barnard of The New York Times offers a story of a grinding struggle in the Damascus suburbs:

In recent days, rebels say, the government has come close to encircling rebels in the southern suburb of Hajar al-Aswad and neighboring Yarmouk Camp, a district once home to both Syrians and Palestinian refugees that has been a battle zone for more than a year and is now fiercely contested by pro- and anti-government Palestinian fighters.

But just one neighborhood away, in Tadamon, on the southern edge of Damascus, pro-government militias remain dug in, facing rebels along long-static front lines. On a recent visit, officers there — surveying deserted, rubble-strewn streets as rebel automatic rifle fire smacked into nearby buildings — said it took them weeks last November to push invading rebels back just a few hundred yards in fighting that shattered blocks of apartment houses.

They said they viewed the opposing fighters as their equals in skill and equipment, and that they had no plans to try to advance, to avoid military and civilian casualties that would further stress hospitals and fighters already stretching their capacity.

Part of the failure of Syrian forces to capitalize fully on their gains, according to government fighters and supporters, stems from conflicting strategies within the government. Some officials are trying to moderate the fighting and seek local cease-fires, especially after the threat of an American strike and the government’s effort to portray itself as seeking peace on the international stage. Others are advocating a more aggressive strategy.

Any attempt to expel insurgents from Aleppo, where they have been established for 16 months, is likely to present even more challenges.

And the Qalamoun offensive could struggle to make a mark before winter sets in. Insurgents, long expecting the assault, have been organizing and co-ordinating — perhaps more effectively than in other areas of Syria — in the mountains they know well.

Barnard concludes with this caution:

When the government aided by Hezbollah took the city of Qusayr, near the Lebanese border, in May, supporters said it would soon go on to sweep rebels from pockets in and around Homs and Aleppo to the north. But despite some advances around those cities, the government has yet to repeat a wholesale takeover of a rebel population center, nor has it been able even to normalize the small city of Qusayr, which remains a military zone bereft of residents and patrolled by the government and its Hezbollah allies.

In September, after the chemical deal, government officials declared that broad segments of rebel-held Damascus suburbs from the southwest to the northeast would be retaken within weeks. Two months later, the current advance is just beginning to gather force.