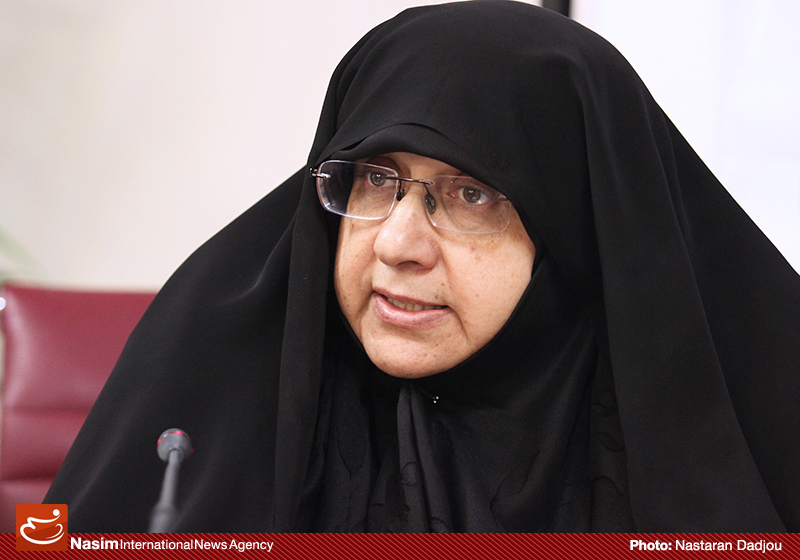 The Zeinab Society’s Secretary Azam Haji Abbasi said, “With the consideration of [Rafsanjani’s] guidance, we concluded that the precursor for the greater activity of women in various arenas, including increasing the number of female representatives in Parliament, is the creation of a non-partisan party.”

Another leading Society member, Masoume Rezaei, added, “We have introduced the proposal of [establishing] the Ministry of Women in order to address women’s issues in all arenas, and a Women’s Affairs Department must be established in all ministries.”

Rouhani had emphasized women voters and women’s rights during his election campaign.

Meanwhile, Sepah News — the official PR outlet of the Revolutionary Guards — took the unusual step of featuring an image of a woman on its website: the leader of the Basij Women’s Society Minu Aslani. Aslani announced that the Society had created over 100,000 circles of pious sisters who meet each week to discuss modesty and the hijab, and then discuss the issues raised in working groups. The report comes after Aslani announced in October that 50,000 Basij members had been trained to preach about chastity and the hijab.

Sources give BBC Persian an alternative narrative to “economic hardship” — see earlier entry — for Iran’s failure to repay loans to the World Bank.

The most interesting passage from the Tehran Friday Prayer of Ayatollah Jannati, the head of the Guardian Council, was an effective admission that Egypt’s 2011 Revolution had failed to bring an “Islamic Awakening”:

The situation in Egypt is unpleasant….We had hoped that the revolution would yield fruit and an Islamic, anti-US revolutionary government would take office…but it all went wrong.

Those who succeeded helped Israel; [they] closed the routes that connected the Gaza Strip to the Sinai; they closed the [supply] tunnels; they recognized Camp David Accord, continued to supply oil to Israel, [and also] established friendly ties [with Israel].

Soon after the overthrow of the Mubarak regime in February 2011, the Supreme Leader declared taht Egypt and the Arab world were following an “Islamic Awakening” inspired by the 1979 Islamic Revolution in Iran. Tehran specifically supported the Egyptian Muslim Brotherhood as an ally who would lead the Awakening.

It is unclear whether Jannati’s criticism was of the military rulers of Egypt in 2011-12, of the Muslim Brotherhood-backed Government of Mohamed Morsi — overthrow by a coup on July 3 — or both. However, he left an interesting marker for a future Iranian policy and desired ally:

“This pro-Israeli policy resulted in the emergence of Tamarod opposition movement, which now enjoys the support of the majority of the Egyptian population.”

Relations between Britain and Iran have effectively been suspended since November 2011 when a crowd stormed the British Embassy in Tehran. More recently, however, Iran has been hinting at the possibility of restoring relations.

Since Rouhani’s election, Jack Straw has been a leading advocate of improved relations with Iran. Writing in the Telegraph in June, Straw has argued that Rouhani “offers hope for the region” and that the west should “show him and his nation patience, respect and understanding.”

In an interview with the conservative Young Journalists Club, the Minister of Intelligence, Heydar Moslehi, did not deny allegations that the office of moderate conservative MP Ali Motahari was wiretapped.

Rather than deny the claims, Moslehi stated that they “should have been investigated immediately.”

Motahari, who is a prominent critic of outgoing president Ahmadinejad, said on Saturday that surveillance equipment had been discovered in his offices.

The commander of the Iranian Revolutionary Gaurds in Qazvin province, Salar Abnoush, has declared that the basij — Iran’s militia volunteer force — is an example for real democracy.

His comments may surprise those protestors who were beaten by basij militia after the disputed 2009 election.

The World Bank has announced that Iran has not paid back any of its loans to the organisation for more than six months.

Iran owed the bank $697 million on June 30, of which $79 million was overdue. The World Bank said that it was placing Iran’s loans in non-performing status, as it must do when a country has not made any payments for more than half a year.

Although Iran has not borrowed from the Bank since 2005, its failure to meet its repayment obligations further highlights the poor state of the economy.

Iran joins Zimbabwe, which has not made any repayments since 2000, as the only two countries in “non-accrual status.”

Leading conservative politician Habibollah Asgarouladi has said that detained opposition leaders Mir Hossein Mousavi and Mehdi Karroubi should repent for their roles in the protests after the disputed 2009 Presidential election.

Mousavi and Karroubi, both candidates, supported the demonstrations for political rights and legitimacy after President Ahmadinejad’s re-election was declared.

Earlier this year, Asgarouladi indicated that the house arrests of Mousavi and Karroubi, now in their 30th month, should be reviewed.

Politicians close to Karroubi have said this week that talks are underway about the opposition leader’s freedom from the house arrest.

PayPal Blocks Sale of Book With Word “Iranian” in Title

PayPal has blocked sales of a book because it has “Iranian” in the title.

The offending publication is Iranian Living Room by Fabrica, an Italian “research centre, studio, and school” linked to the Benetton fashion group. The collection of photos inside Iranian homes, taken by Iranian photographers, had no political intent but seeks to provide a glimpse of life in Tehran.

PayPal’s compliance with the sanctions regulations include screening to detect account holders and transactions that are not supported by the PayPal system for regulatory reasons. This includes screening for transactions which are for the benefit of “sanctioned entities” (i.e. entities which are searched on international lists to prevent financing of terrorism and money laundering) and screening against other internationally binding rules affecting local and cross border trade, as the case may be.

Fabrica was told could either change the title in the book listing or wait to see if PayPal could “whitelist” the account (but not the word “Iranian”).

Montanjabnia said the discussions would “undoubtedly produce results after which the party will officially resume its activities”.

He claimed political conditions had changed with the election of Hassan Rouhani in June: “There was no reason to continue this situation. Karoubi will be now easily released from house arrest.”

The National Trust Party has not formally been banned, but its offices were raided and closed in autumn 2009, soon after the disputed Presidential election.

Karroubi was detained in February 2011, amid the revival of protests, with fellow 2009 Presidential candidate Mir Hossein Mousavi and activist and academic Zahra Rahnavard. Karroubi’s wife Fatemeh was also held but released in the summer.

During his Presidential campaign, Hassan Rouhani said that the house arrests wre not in “our interest”:

We must stop this gap that is growing by the day. It is not difficult to create conditions in the country in the coming year so that not only are they released but that those who are in prison for the 2009 events too are released as well.

After his election, Rouhani has been more cautious:

Some issues are not exclusively in the hands of the administration and require the cooperation of all three branches of government. We will pursue this issue through deliberations, and the problem will be solved in view of the current conditions.